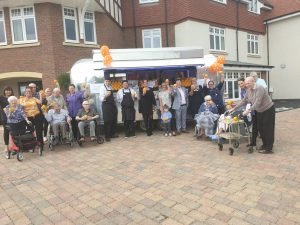 It is estimated there are 50 million people living with dementia and it has been predicted to triple by 2050.

Many thanks to Scott Farms International. Scott Farms delivered a mobile bar and 1100 oranges this morning. We are also raffling a beautiful gin hamper courtesy of The Sweet Potato Spirit Company to raise money for Alzheimer’s Research UK. So far we have raised £100!

Also a big thanks to Silver Birch Bouquets Florist for donating the balloons.

The 1100 oranges donated will be redistributed. We will send them to local schools, shops, food banks. With the help of Scott Farms our oranges will also be distributed as far as North Carolina and Egypt sending a message about dementia along the way.