Making the news again. Cavendish Park is definitely in the limelight. Before we had even opened, we were nominated for the Caring UK Awards for the Community Involvement Award. In addition The Evesham Journal have published an article, showcasing the wonderful relationships we’ve built. 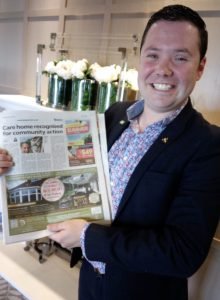 Along with testimonials from some of the organisations that we have supported such as: Bengeworth Academy, The DAA, The Mayor of Evesham, Safehaven Pet Therapy, Evesham Cricket Club and Offenham C of E First School. We are absolutely confident that we will be scooping the award at the ceremonial prize giving in the Autumn!